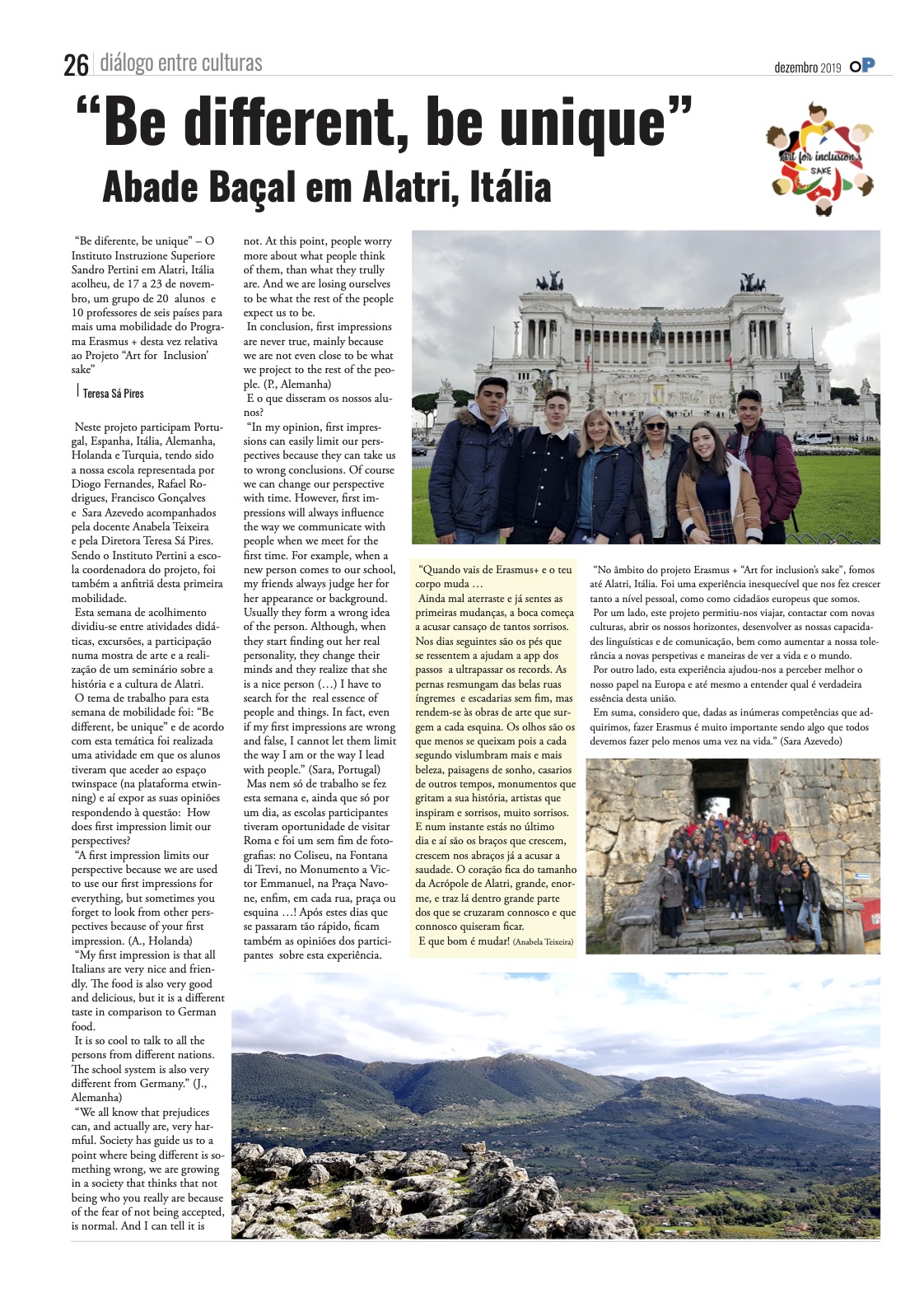 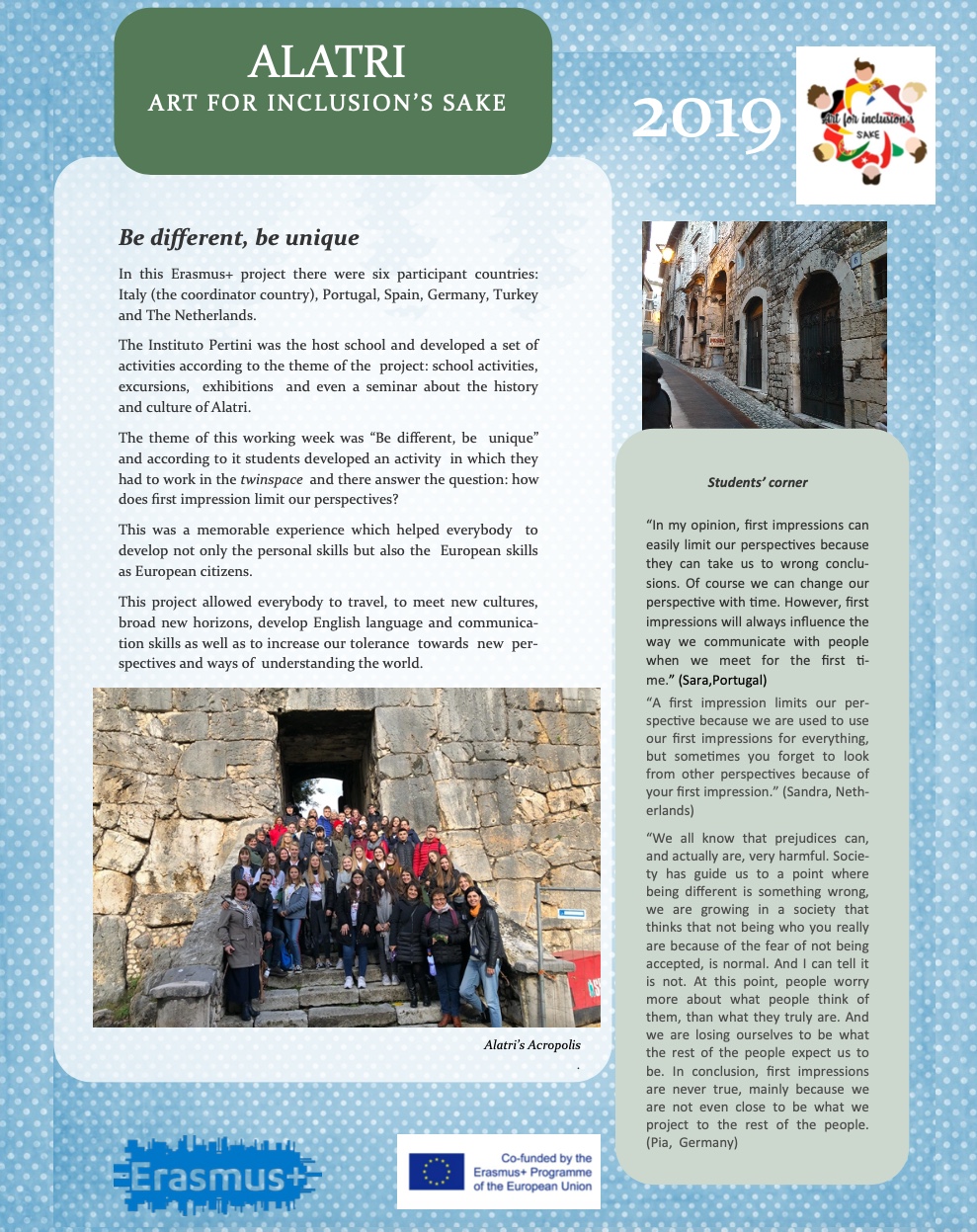 The 2th Short-Term Exchange of Students

UNDER THE ERASMUS+ PROJECT

The general objectives of the project:

initiating the activities of the project and using the informational and communicative technologies.

The specific objectives of the project:

determine them to be individually and collectively active.

life itself, thus making them aware that the environment in which we live is very important and that the

community should be very responsive to this subject.

4 STUDENTS + 2 TEACHERS per school were attending.

On the first day, at 9.00 am, activities started in the auditorium, where students and teachers from different countries presented themselves to the others. Then, each school presented its country, city and school, using pp presentations or videos. At the end of the morning, and after a visit to the Abade de Baçal School, the Ethnic Buffet was held at the library, where each country presented typical foods from their city and country. After that, students and teachers had the opportunity to taste the different foods.

In the afternoon, after lunch in the school canteen, students and teachers made a short visit to the city of Bragança (in groups with students from all countries), being guided by Portuguese students, who spoke about the main monuments and attractions of the city to their foreign colleagues.

On Tuesday, the second day of mobility, students participated, at 8.30 am, in Portuguese students' classes, integrating different classes. Then, they participated in the workshops “When in Rome, do as the Romans do” and “How to solve this problem?”, Where they were faced with different challenges, having to work in groups and look for negotiated solutions. At the end of the morning, activities were recorded on the Etwinning platform.

In the afternoon, after lunch in the school canteen, the students created the song (hymn) of the project, each country working on a verse of that song and everyone on the chorus. Later on, the chorus will be chosen. The work was very fruitful and all the delegations managed to achieve the goal, with the support of the school's music teachers. Throughout the afternoon, filming was done, aiming at the subsequent making of a video clip.

In the evening, an Ethnic Outfit Fashion Show was held, at the students’ area, with all countries presenting typical clothes from their regions. The school also provided period costumes to both Portuguese and foreign students.

On Wednesday, a visit was made to the city of Porto. In the morning, this visit was conducted by a professional guide, who guided students and teachers through the main monuments and cultural highlights of the city of Porto, namely the Old Cathedral, the Ponte Luís, the market, the Stock Exchange Palace, the photography museum and some churches. In the afternoon, the visit continued, and the participants were free to choose what places of interest they were going to visit.

On the fourth day of mobility, the students participated, early in the morning (and after attending classes with their Portuguese colleagues again), in a typical Portuguese Dance Workshop, where some younger students from the 6th grade of the Augusto Moreno School were also present. .

In the afternoon, after lunch in the school canteen, the students visited two of the museums in the city of Bragança: The Graça Morais Contemporary Art Center and the Georges Dussaud Photography Center. The two visits were conducted by one of the guides at the Graça Morais Museum. Here, the guide talked about some important cultural elements of the Region, which are present in the paintings of Graça Morais. At the Georges Dussaud Photography Center, the participants could see the photographs of Georges Dussaud - an important French photographer who was passionate about the Region and whose photos so well documented the Region’s people, lifestyle and landscape.

At night, as an extra activity, the students of this mobility participated in a school activity, which was related to the literary culture of the country. The event, called Café com Pessoa, was organized by 12th grade students and aimed at paying tribute to  one of the most important Portuguese poets - Fernando Pessoa. Some students ended up reading some of the poet's poems in English, on an evening that ended with tea and cookies.

On the last day of mobility, the students were present again in the classes of their Portuguese colleagues in the morning. Then, in the library, they participated in the “Words of Respect” workshop and created a mini-dictionary in six different languages ​​with words related to respect. A little later, in one of the school's IT rooms, using the online tool WordClouds, students created small posters that were then placed on the Etwinning platform, with the words they had chosen for their small dictionary.

Finally, the Headmistress of the Agrupamento de Escolas Abade Baçal gave all participants the certificate of participation, which ended the work week for the students and teachers who took part in this mobility.

This LTTA  helped students to:

-To gain a new perspective on the lives of others around you as well as around the world;

-To understand other’s perspectives, to broaden our own, and to fully experience and educate ourselves;

-To promote research, creativity and diffusion of Culture and the arts;

-To favour exchange and promotion of national and international artists and researchers;

-To organize cultural activities in order to potentiate the interaction between local cultural initiatives and international artists;

-To promote the participation of the selected artists and researchers in different local and international networks;

-To organize cultural activities such as residencies, workshops and exhibitions;

-To participate in debates, seminars and conferences in order to be part of the current;

-To Understand people and their backgrounds is crucial for personal and community growth;

-To see how many different forms of music can bring happiness to groups outside of their own traditional roots;

-To foster diversity as a value;

-To increase cooperation in transnational teams;

-To contribute to pupils’ development as informed global citizens;

-Cultural celebrations will foster respect and open-mindedness for other cultures;

-Celebrating our differences, as well as our common interests, will help unite and educate us;

-People all around need to understand and learn to appreciate other cultures, and this is one way to accomplish that;

-Cultural celebrations will foster respect and open-mindedness for other cultures.

Students became more aware of the importance of respecting other cultures. They had a serious attitude towards this issue and wanted to develop a more responsible behavior about the way in which they interact. The project activities stimulated the students’ interest to be better citizens and to act as social change makers.