On the 19th January 2020 we flew from the Dortmund Airport to Porto. On our first day we had time to get to know our hosts.

20th January 2020:
We had to present something about our country like a video, rap, power point presentation etc. Then the students from Portugal showed us their school. After that we went to the library and tried typical foods and snacks from our partner countries. Then we had lunch at the cafeteria as every other day. Afterwards we visited Braganca in little groups. Towards evening we went back to our host families and had dinner  together.

21st January 2020
On Tuesday morning we attended to some classes with our hosts and after that we went to the library. There we saw some images we had to describe and say what we think about them. After that we moved to the primary school and wrote lyrics for our Erasmus song we had to sing later. In the evening we went back to the school to show the others some typical outfits of our countries. It was very funny because we also learned some typical Portuguese dances

22nd January 2020
We went to Porto by bus in the very early morning and made a city tour there. We learned very much about the city and its attractions which was very useful. We took so many pictures of this beautiful city and also had some free time there to shop or eat something. After we had arrived  Branganca we spent the rest of the evening with our host families.

23rd January 2020:
That morning we attended classes with our hosts, later we went to the primary school again. The students there showed us a lot of Portuguese dances. The little kids were so cute and very good at dancing. First they just showed us these dances and after showing them us the  second time  we had to dance too and it was super funny. Later on that day we had to meet at the school entrance and  went to two museums/photo galleries which were also very interesting. Some photos there weren`t so good because there were also pictures of corpses but all in all it was cool.

24th January 2020
After we attended the classes with our hosts we went to the library to learn some "words of respect" . We talked a lot about the term "respect" and also worked on apoem. Then we went to a computer room to write our reports about this journey because unfortunately it was our last day here in Portugal☹. After writing our poems we had a lot of free time which the most of us used to prepare our suitcases. Then in the evening we had a big farewell dinner with very delicious Portuguese food. After that most of the students met at a café to say goodbye to each other. It was a very great evening and tears flowed too.

24th January 2020
It was the final day. The time to say goodbye. We had to get up very early because we had to go to the bus which brought us to Porto together with the Dutch students. There we had eight hours to spend because our flight was very late in the evening. We just shopped there a bit and had a look at the city. We also ate there in a restaurant which was beautiful because it was next to a meadow and sun was shining directly to our faces during our meal.  Then around 7 pm our flight started back to Germany. 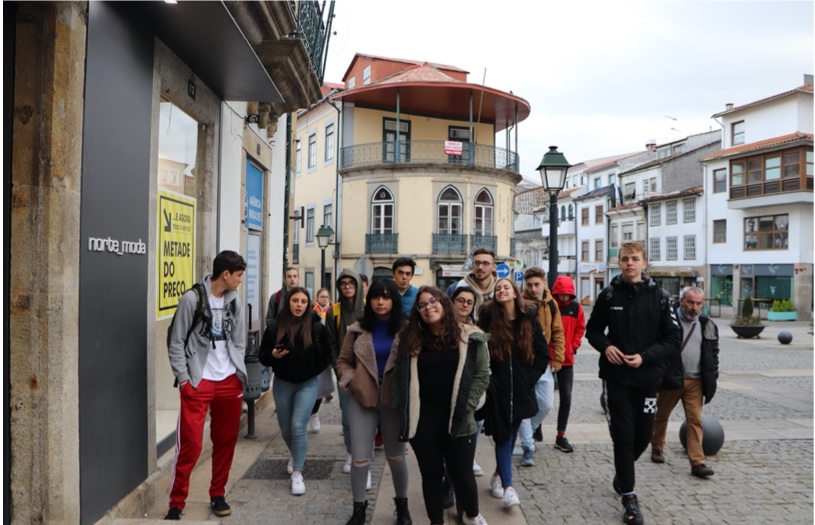 RESPECT OTHER CULTURES but Be yourself

“Be yourself “ was the main theme of the second mobility which hapenned in Bragança, Por- tugal. It was a full week of activities which began with an ethnic buffet where all the partici- pants could try the traditional foods of their partners and it certainly was a big success.
But the week went on with very different events and workshops: When in Rome, do as Ro- mans do; how do you solve common problems?/ Folk Portuguese Music creating a multilan- guage project song/Folk Portuguese dance and Words of respect—creating a mini-dictionary in six different languages.

Everybody had a great time because not everything was about work. A visit to Oporto or the “ethnic outfit fashion” as well as “coffee with Pessoa” were some of the highlights of the the week.
The main objectives of this week’s program were completely fulfilled and hopefully contri- buted to the apprenticeship of a truly European citizenship. Everybody was looking forward for the next mobility in Amsterdam,The Netherlands.